Registration is £40 per team and the tournament is open to FA affiliated teams only.

Colts and Generals competition from u7 to u14s

Our tournament is very popular so please don’t leave it too late to register.
Closing date: 30th April

Final joining instructions will be issued to all registered teams 2 weeks before the tournament.

No dogs and no smoking on site.

An all-star line-up of celebrities will be taking part in a charity football match at the Meadow to support Buckinghamshire Mind – the county’s leading mental health charity on Sunday 19th September 2021.

Those set to pitch their football skills against each other include I’m a Celebrity… Get Me Out of Here winner Jaqueline Jossa and soap legend Jake Wood, as well as reality TV stars Calum Best, Dan Osborne and James Argent with more set to be announced in the coming weeks.

They will be joined the world’s most popular freestylers, Billy Wingrove and Jeremy Lynch, otherwise known as F2Freestylers who will be showing their skills on the pitch alongside ex-professionals Lee Trundle, Paul Konchesky and Jamie O’Hara at The Meadow, home of Chesham United.

The game will kick off at 3pm, with turnstiles opening at 1pm.

“After a very crazy and tough world over the last 18 months, we are pleased to now bring Sellebrity Soccer to non-league clubs and to support the clubs and their local charities too.

We are very excited to be coming to Chesham United FC to bring some much-needed feel-good factor with a very exciting celebrity match but more importantly help raise funds for Bucks Mind.

Let’s make this a special day, so come along and support us”

“We are excited to host this celebrity match, which is new territory for us. Hopefully it’s a great success and it’s an event we can look to add to the calendar year on year.

As a football club it is so important that we play our part in the community, above and beyond just fielding a semi-professional team every Saturday for the paying spectators, which is why I am so excited by the prospect of this game as part of our partnership with Buckinghamshire Mind.

Mental well-being has been a hidden concern for a long time amongst people of all ages and the current pandemic has only heightened the problem and it is so important that we take this opportunity to help people to cope with their own issues and spread the message that it is ok to talk about your concerns.” 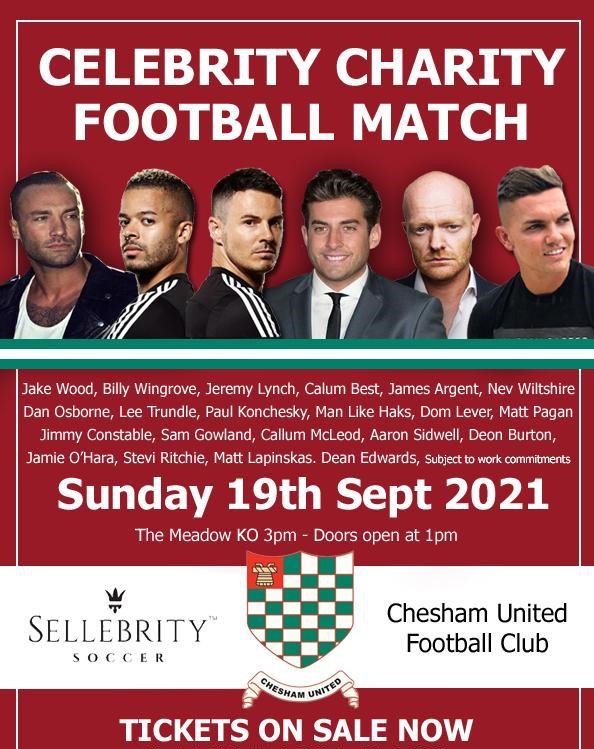